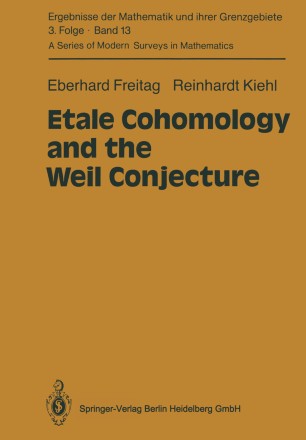 Etale Cohomology and the Weil Conjecture

Some years ago a conference on l-adic cohomology in Oberwolfach was held with the aim of reaching an understanding of Deligne's proof of the Weil conjec­ tures. For the convenience of the speakers the present authors - who were also the organisers of that meeting - prepared short notes containing the central definitions and ideas of the proofs. The unexpected interest for these notes and the various suggestions to publish them encouraged us to work somewhat more on them and fill out the gaps. Our aim was to develop the theory in as self­ contained and as short a manner as possible. We intended especially to provide a complete introduction to etale and l-adic cohomology theory including the monodromy theory of Lefschetz pencils. Of course, all the central ideas are due to the people who created the theory, especially Grothendieck and Deligne. The main references are the SGA-notes [64-69]. With the kind permission of Professor J. A. Dieudonne we have included in the book that finally resulted his excellent notes on the history of the Weil conjectures, as a second introduction. Our original notes were written in German. However, we finally followed the recommendation made variously to publish the book in English. We had the good fortune that Professor W. Waterhouse and his wife Betty agreed to translate our manuscript. We want to thank them very warmly for their willing involvement in such a tedious task. We are very grateful to the staff of Springer-Verlag for their careful work.