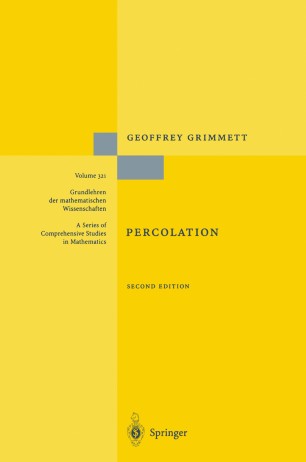 Percolation theory is the study of an idealized random medium in two or more dimensions. It is a cornerstone of the theory of spatial stochastic processes with applications in such fields as statistical physics, epidemiology, and the spread of populations. Percolation plays a pivotal role in studying more complex systems exhibiting phase transition. The mathematical theory is mature, but continues to give rise to problems of special beauty and difficulty. The emphasis of this book is upon core mathematical material and the presentation of the shortest and most accessible proofs. The book is intended for graduate students and researchers in probability and mathematical physics. Almost no specialist knowledge is assumed beyond undergraduate analysis and probability. This new volume differs substantially from the first edition through the inclusion of much new material, including: the rigorous theory of dynamic and static renormalization; a sketch of the lace expansion and mean field theory; the uniqueness of the infinite cluster; strict inequalities between critical probabilities; several essays on related fields and applications; numerous other results of significant. There is a summary of the hypotheses of conformal invariance. A principal feature of the process is the phase transition. The subcritical and supercritical phases are studied in detail. There is a guide for mathematicians to the physical theory of scaling and critical exponents, together with selected material describing the current state of the rigorous theory. To derive a rigorous theory of the phase transition remains an outstanding and beautiful problem of mathematics.