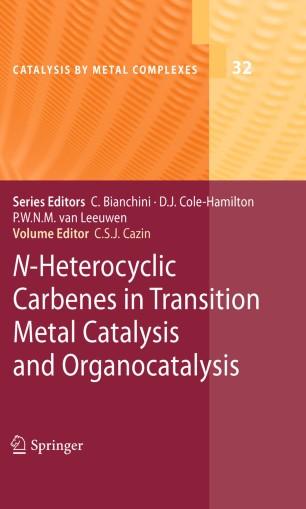 N-Heterocyclic Carbenes in Transition Metal Catalysis and Organocatalysis features all catalytic reactions enabled by N-heterocyclic carbenes (NHCs), either directly as organocatalysts or as ligands for transition metal catalysts. An explosion in the use of NHCs has been reported in the literature during the past seven years making this comprehensive overview highly apropos.

The book begins with an introductory overview of NHCs which could have been subtitled all you need to know about NHCs. The main body of the book is dedicated to applications of NHCs in catalysis. In addition to the success stories of NHCs in metathesis, NHCs in cross coupling and more recently NHCs in organocatalysis, all other less publicized areas are also covered. As the success of NHCs is generally attributed to their potential to stabilize metal centres, the inclusion of a chapter on the decomposition of NHC catalysts is pertinent. The book closes with a chapter describing the applications of NHCs in industrial processes, which is the first coverage of its kind, and brings a unique industrial context to this book.

Included in this book:

N-Heterocyclic Carbenes in Transition Metal Catalysis and Organocatalysis provides a fresh view of NHCs since most contributors are young emerging researchers in the field of homogeneous catalysis using NHCs. This group of contributors is complemented by highly established academic researchers and an industrialist. This book is comprehensive, from the basic features of NHCs to the latest advances, hence it is suitable for both the novice and the expert.