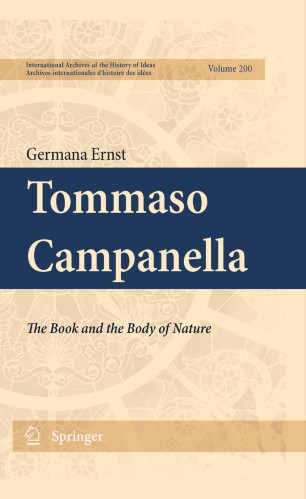 The Book and the Body of Nature

A friend of Galileo and author of the renowned utopia The City of the Sun, Tommaso Campanella (Stilo, Calabria,1568- Paris, 1639) is one of the most significant and original thinkers of the early modern period. His philosophical project centred upon the idea of reconciling Renaissance philosophy with a radical reform of science and society. He produced a complex and articulate synthesis of all fields of knowledge – including magic and astrology. During his early formative years as a Dominican friar, he manifested a restless impatience towards Aristotelian philosophy and its followers. As a reaction, he enthusiastically embraced Bernardino Telesio’s view that knowledge could only be acquired through the observation of things themselves, investigated through the senses and based on a correct understanding of the link between words and objects. Campanella’s new natural philosophy rested on the principle that the books written by men needed to be compared with God’s infinite book of nature, allowing them to correct the mistakes scattered throughout the human ‘copies’ which were always imperfect, partial and liable to revisions. It is in the light of these principles that he defended Galileo’s right to read the book of nature while denouncing the mistake of those – be they Aristotelian philosophers or theologians – who wanted to stop him from carrying on his natural investigations. However, Campanella maintained that the book of nature, far from being written in mathematical characters, was a living organism in which each natural being was endowed with life and a degree of sensibility that was appropriate for its preservation and propagation. Nature as a whole was an organism in which each single part was directed towards the common good. This is the reason why Campanella thought that nature had to be regarded as an ideal model for any political organisation. Political structures were often ruled by injustice and violence precisely because they had departed from that natural model. This book charts Campanella’s intellectual life by showing the origin, development and persistence of some of the fundamental tenets of his thought.