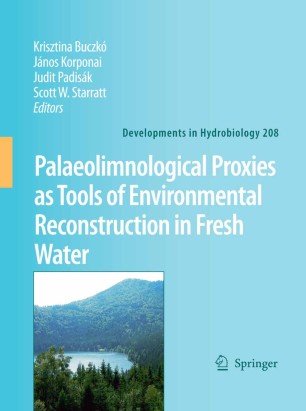 Palaeolimnological Proxies as Tools of Environmental Reconstruction in Fresh Water

Part of the Developments in Hydrobiology book series (DIHY, volume 208)

Palaeolimnology is one of the most rapidly developing fields of limnology. The primary objective of this volume is to present new palaeolimnological findings from eastern and central Europe. Although this area has sometimes received less attention than other areas of Europe, the lakes and mires, coupled with the variability in landscape and the local differences in climate, provide unique opportunity for studying palaeolimnology. The volume starts with a review on late Quaternary records form the Carpathian region, followed by new results on the history of a crater lake, Lake Saint Ana, glacial lakes in the Tatra Mountains and Lake Bled in Slovenia. In addition, the various papers provide new insights on the development of lakes and bogs during the late glacial and Holocene, using a wide range of palaeolimnological proxies, including diatoms, pollen, macrofossils, pigments, cladoceran remains, chironomids, chaoborids, stable isotopes and geochemistry. The motivation for collecting recent knowledge derives from the recognition of the importance, and applicability of palaeolimnological tools to help in defining "reference conditions" as designated within the Water Framework Directives and estimating influence of global climate change on surface waters.