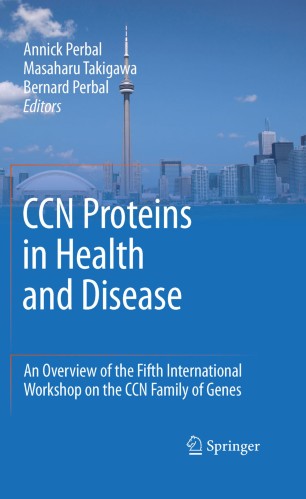 CCN Proteins in Health and Disease

The current view is that CCN proteins modulate signaling pathways that involve regulatory components of the extracellular matrix. As such, they likely act as a central hub in the regulation of mitosis, adhesion, apoptosis, extracellular matrix production, growth arrest and migration of multiple cell types.

The 5th international workshop on the CCN family of genes, that was held in Toronto in 2008 brought together scientists from around the world who have an interest in the biological roles of this emerging family of proteins. On an educational point of view, the workshop was a unique place for an efficient diffusion of scientific information.

The present book comprises a series of selected manuscripts that are based on the original communications that were presented at the meeting by worldwide leaders in the field of CCN biology.

All major aspects of CCN proteins biology in both normal and pathological conditions are covered in this volume, from structure-functions analysis up to the involvement of CCN proteins in complex physiological functions.

In addition to reports that support the Yin-Yang concept of CCN proteins driving opposite effects on the same biological process, this book also comprises several contributions that point to CCN proteins as amenable targets for therapeutic manipulation of disease processes.

Together with the special issue of Journal of Cell Communication and Signaling in which authors have extended on the original data presented at the meeting, the present Proceedings provide an instant picture and unique update of the state of the art in the CCN field.