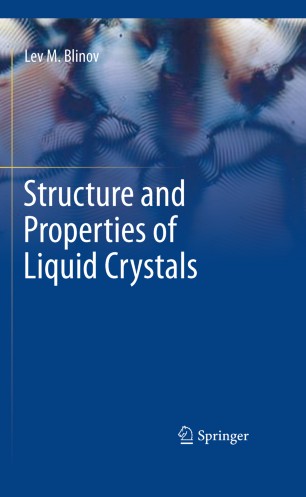 Structure and Properties of Liquid Crystals

This book by Lev M. Blinov is ideal to guide researchers from their very first encounter with liquid crystals to the level where they can perform independent experiments on liquid crystals with a thorough understanding of their behaviour also in relation to the theoretical framework. Liquid crystals can be found everywhere around us. They are used in virtually every display device, whether it is for domestic appliances of for specialized technological instruments. Their finely tunable optical properties make them suitable also for thermo-sensing and laser technologies. There are many monographs written by prominent scholars on the subject of liquid crystals. The majority of them presents the subject in great depth, sometimes focusing on a particular research aspect, and in general they require a significant level of prior knowledge. In contrast, this books aims at an audience of advanced undergraduate and graduate students in physics, chemistry and materials science. The book consists of three parts: the first part, on structure, starts from the fundamental principles underlying the structure of liquid crystals, their rich phase behaviour and the methods used to study them; the second part, on physical properties, emphasizes the influence of anisotropy on all aspects of liquid crystals behaviour; the third, focuses on electro-optics, the most important properties from the applications standpoint. This part covers only the main effects and illustrates the underlying principles in greater detail. Professor Lev M. Blinov has had a long carrier as an experimentalist. He made major contributions in the field of ferroelectric mesophases. In 1985 he received the USSR state prize for investigations of electro-optical effects in liquid crystals for spatial light modulators. In 1999 he was awarded the Frederiks medal of the Soviet Liquid Crystal Society and in 2000 he was honoured with the G. Gray silver medal of the British Liquid Crystal Society. He has held many visiting academic positions in universities and laboratories across Europe and in Japan.