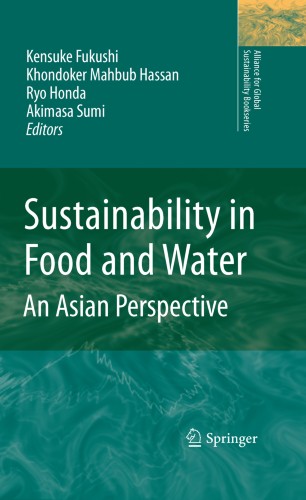 Sustainability in Food and Water

The need to put into perspective the ever-mounting body of new information, beyond the frames of disciplines, on environmental security of food and water issues in Asia provided the impetus for the development of this book. It combines presentations from symposia on food and water sustainability held recently in Macau, China.

This book represents the latest research findings in all the major aspects of food and water security issues in Asia. The first chapter portrays the strategies for water resources management in Asian countries. In this connection, the environmental challenges for sustainable development were discussed. Model application on spatial allocation of water resources viewed the tradeoff between economic goal and ecological goal. The hydrological changes related to the socio-economic development in china were also included in this chapter. The second chapter deals with sustainable water uses in domestic purposes for both urban and rural areas. The potential use of reclaimed wastewater was described in the context of different cities as reference for the urban water management in whole Asia. The traditional drinking water uses in rural communities and associated challenges towards sustainability were also discussed in this regard. The third chapter focuses on the security issues in aquatic products. The long-term strategy for the fisheries development in China was represented as lessons for other communities in Asia. The environmental impacts of aquaculture and the control measures were also included in this discussion. Chapter four of this book represents the sustainability aspect in food grains. The delicate balance between water resources and food grain production was addressed. Sustainable strategies for water use and food production were described in the context of several Asian countries. The impact of biofuel production on food security issues was raised in this discussion. Some other socio-economic factors related to this issue were also included in this chapter. The overarching importances of the food and water sustainability issues in climate changes have been shown in chapter five. Impacts of global warming on water resources and food production in Asian countries were described with examples and simulation. Mitigation measures were also sited with regional references in Korea, Thailand and other parts of Asia. Strategies aiming the security issues in food and water were addressed in chapter six. Scenarios of environmental managements in Asian countries related to allocation of water resources, water quality, remediation of hazardous wastes, and soil clean up were the major topics in this context. The organizational strategies were also assessed in this discussion.