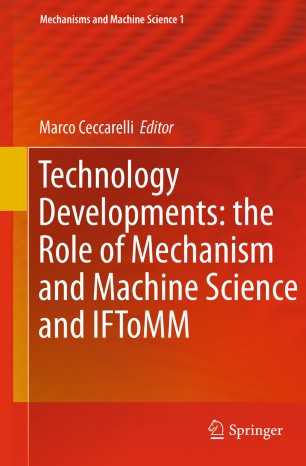 Technology Developments: the Role of Mechanism and Machine Science and IFToMM

This is the first book of a series that will focus on MMS (Mechanism and Machine Science). This book also presents IFToMM, the International Federation on the Promotion of MMS and its activity.

This volume contains contributions by IFToMM officers who are Chairs of member organizations (MOs), permanent commissions (PCs), and technical committees (TCs), who have reported their experiences and views toward the future of IFToMM and MMS. The book is composed of three parts: the first with general considerations by high-standing IFToMM persons, the second chapter with views by the chairs of PCs and TCs as dealing with specific subject areas, and the third one with reports by the chairs of MOs as presenting experiences and challenges in national and territory communities.

This book will be of interest to a wide public who wish to know the status and trends in MMS both at international level through IFToMM and in national/local frames through the leading actors of activities. In addition, the book can be considered also a fruitful source to find out  “who’s who”  in MMS, historical backgrounds and trends in MMS developments, as well as for challenges and problems in future activity by IFToMM community and in MMS at large.