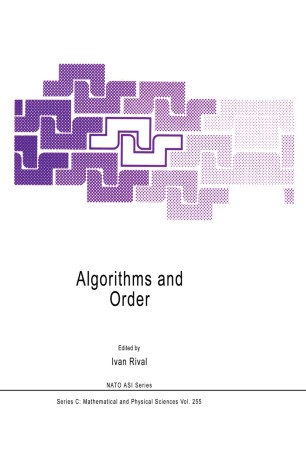 This volume contains the texts of the principal survey papers presented at ALGORITHMS -and ORDER, held· at Ottawa, Canada from June 1 to June 12, 1987. The conference was supported by grants from the N.A.T.O. Advanced Study Institute programme, the University of Ottawa, and the Natural Sciences and Engineering Research Council of Canada. We are grateful for this considerable support. Over fifty years ago, the Symposium on Lattice Theory, in Charlottesville, U.S.A., proclaimed the vitality of ordered sets. Only twenty years later the Symposium on Partially Ordered Sets and Lattice Theory, held at Monterey, U.S.A., had solved many of the problems that had been originally posed. In 1981, the Symposium on Ordered Sets held at Banff, Canada, continued this tradition. It was marked by a landmark volume containing twenty-three articles on almost all current topics in the theory of ordered sets and its applications. Three years after, Graphs and Orders, also held at Banff, Canada, aimed to document the role of graphs in the theory of ordered sets and its applications. Because of its special place in the landscape of the mathematical sciences order is especially sensitive to new trends and developments. Today, the most important current in the theory and application of order springs from theoretical computer seience. Two themes of computer science lead the way. The first is data structure. Order is common to data structures.