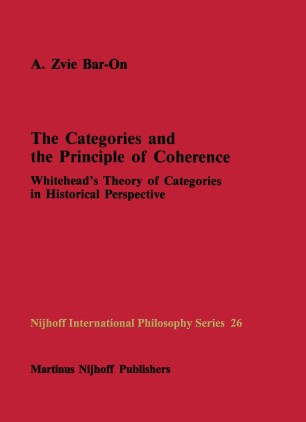 The Categories and the Principle of Coherence

The general topic of this book is the theory of categories, its sources, meaning and development. The inquiry can be seen to proceed on two levels. On one, the history of the theory is traced from its alleged genesis in Aristotle, through its main subsequent stages of Kant and Hegel, up to a kind of consummation in two of its prominent twentieth century adherents, Alfred North White­ head and Nicolai Hartmann. Special attention has been paid to that aspect of the Hegelian conception of the categorial analysis from which the principle of coherence emerged. On the second, deeper level, however, everything starts with Whitehead's metaphysical system, the central part of which con­ sists of a fascinating, though highly intricate, web of categorial notions and propositions. The historical perspective becomes a means for untangling that web. I am indebted to a number of people for advice, comment and criticism of various parts of this book. My greatest thanks go to my teachers and colleagues Nathan Rotenstreich, Nathan Spiegel, Yaakov Fleischman, as well as to the late Shmuel Hugo Bergman and Pepita Haezrachi. of this book was published in 1967 by An earlier, Hebrew version the Bialik Institute of Jerusalem. I am grateful to Mr Yehoshua Perel, Mr Arnold Schwartz and to my wife Varda for their cooperation in rendering the extensively revised text of the book into readable English. I also owe great appreciation to Miss Liat Dawe for an accurate and painstaking word-processing of the text.