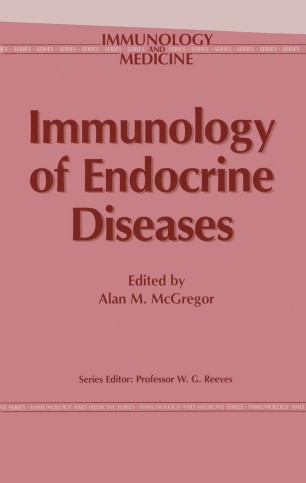 Part of the Immunology and Medicine book series (IMME, volume 3)

Nineteen eighty-six is a most appropriate year in which to be writing about developments in the organ-specific, autoimmune endocrine diseases. It celebrates the publication 30 years ago in 1956 of the classic papers of Roitt and Doniach and their co-workers I , and of Rose and Witebsky2 and Adams 3 and Purves . These three sets of fundamental observations provided the initial building blocks upon which much of what has been established in the field in the last 30 years was built. No publication of this nature on endocrine autoimmune disease can cover every aspect of the subject. I have chosen to highlight the organs (thyroid and pancreeas) which have attracted the most attention, and the areas of work within these fields within which most research effort is currently focused. There are still some gaps; the insulin and TSH receptors are not considered, nor in any detail are the role of cytotoxic mechanisms in mediating gland destruction. Molecular biology will undoubtedly in the next few years clarify once and for all the controversy that surrounds the structure of the TSH receptor and T cell cloning, the role of cell-mediated cytotoxicity. The pathogenetic mechanisms underlying autoimmunity are increasingly well understood and the search for the aetiology has begun.