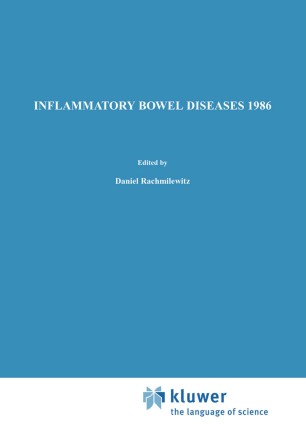 Part of the Developments in Gastroenterology book series (DIGA, volume 8)

The Second International Symposium on Inflammatory Bowel Diseases was held in Jerusalem from September 8-11, 1985, under the auspices of the Israel Academy of Sciences, the Israel Gastroenterological Society and the Hebrew University-Hadassah Medical School. Five hundred physicians and researchers from 26 countries attended. The symposium was organized into six panels devoted to state of the art reviews and presentations of the latest findings and approaches on etiology, pathogenesis, medical and surgical management of IBD and clini­ cal assessment of disease. In addition, 89 abstracts were presented as posters during the symposium, all of which were published in the book of abstracts. The concluding panel outlined new directions for future re­ search on IBD. The organizing committee gratefully acknowledges all the contributors who presented their work in a clear and concise manner, and to all the participants whose active role in the discussions contributed to the suc­ cess of the meeting. In view of the great interest in the symposium and the tradition es­ tablished following the first, in 1981, it was decided to convene a third international symposium on IBD in Jerusalem in September 1989.