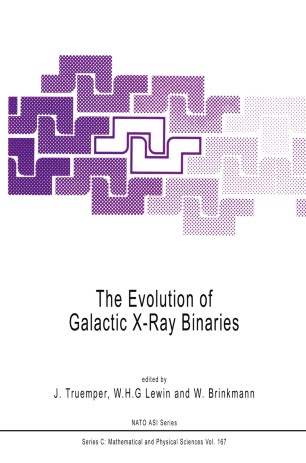 The Evolution of Galactic X-Ray Binaries

The idea to hold a conference on the Evolution of Close-Binary X-ray sources grew in the summer of 1984. At that time we were hoping that some new results would be harvested in the months to come which would stimulate further work. We were particularly looking towards the Euro­ pean X-ray Observatory, EXOSAT, for new contributions. How lucky we were; quite unexpected developments took place. Just prior to the conference, quasi-periodic oscillations (now known as QPO) were discovered in three bright low-mass X-ray binaries: GX 5-1, Sco X-1, and Cyg X-2. They played an important role at the meeting. The possibility that QPOs imply a neutron star magnetic dipole field, and a neutron star rotation period in the millisecond range, received a lot of attention. This is not surprising, as it lends support to the idea, suggested earlier, that the 6-msec binary radio pulsar PSR 1953+29 evolved from a stage in which it was a bright low-mass X-ray binary. There was special interest in the possibility of white dwarf collapse into a neutron star. This is a. particularly attractive way to form the bright low-mass X-ray binaries, often referred to as galactic bulge sources. It would allow for the possibility of a very young neutron star in a very old binary system. The relatively high magnetic fields that one could infer from QPO could then be explained.