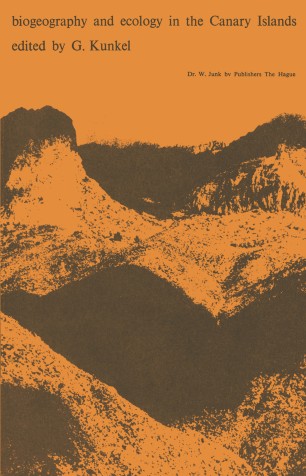 Biogeography and Ecology in the Canary Islands

When asked by the General Editor to prepare a book-length treatment concerning the nature of the Canary Islands, our aims were rather ambitious. A general monograph was to be written, embracing all the disciplines of natural history applicable to these islands, and over twenty scientists were approached for contributions. However scientists are 'time machines' ; our proposed list of contents has changed a good many times. Cooporation of other authors was gained and, finally, a fairly rounded project appeared revealing different and lesser known aspects of Canary Island Nature. Since Centuries the Canary Islands have attracted the attention of travellers. Earliest reports may be traced back some two thousand years but real scientific investigation began about 1800, the time of Alexander von Humboldt and his visit to the islands; older reports are scarce, sometimes rather confusing because of geographic inaccuracies. But the 19th Century will remain as the century of fundamental explorations, connected with names such as Leopold von Buch, F. C. MacGregor, Sabin Berthelot, Philip Barker Webb, J. Viera y Clavijo, F. von Fritsch, C. Bolle, D. H. Christ, O. Simony, G. Hartung, H. Mayer etc. , all familiar and intimately connected with our knowledge of the natural history of the archipelago. Even the much criticised Ernst Haeckel has provided us with lively descriptions of his visit to one of the 'Fortunate Islands'. The 20th Century brought new interest, new fields to be explored, and new expeditions to the islands.