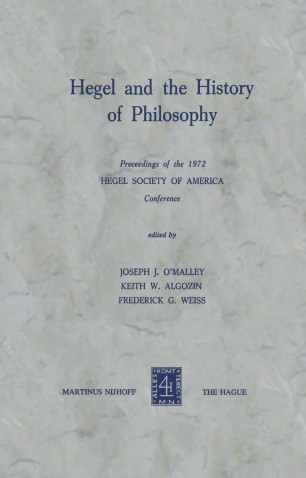 Proceedings of the 1972 HEGEL SOCIETY OF AMERICA Conference

The papers published here were given at the second biennial conference of the Hegel Society of America, held at the University of Notre Dame, November 9-11, 1972. They appear in an order which reflects roughly two headings: (1) Hegel's conception of the history of philosophy in general, and (2) his relation to individual thinkers both before and after him. Given the importance of the history of philosophy for Hegel, and the far-reaching impact of his thought upon subsequent philosophy, it becomes immediately apparent that we have here only a beginning. At the conference, cries went up "Why not Hegel and Aristotle, Aquinas, HusserI and Hart­ mann?" Indeed, why not? The answer, of course, might be given by Hegel himself : if we wish to accomplish anything, we have to limit ourselves. We trust that future conferences and scholarship will bring to light these relationships and the many more which testify to Hegel's profound presence in the mainstream of past and present thought. It is furthermore no accident that the renaissance of Hegelian studies has brought with it a rebirth of the history of philosophy as something relevant to our own problems. For Hegel, the object of philosophy is alone the truth, the history of philosophy is philosophy itself, and this truth which it gives us cannot be what has passed away.