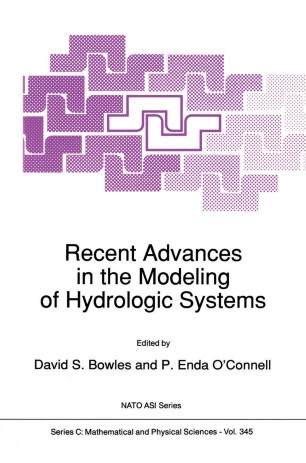 Recent Advances in the Modeling of Hydrologic Systems

Modeling of the rainfall-runoff process is of both scientific and practical significance. Many of the currently used mathematical models of hydrologic systems were developed a genera­ tion ago. Much of the effort since then has focused on refining these models rather than on developing new models based on improved scientific understanding. In the past few years, however, a renewed effort has been made to improve both our fundamental understanding of hydrologic processes and to exploit technological advances in computing and remote sensing. It is against this background that the NATO Advanced Study Institute on Recent Advances in the Modeling of Hydrologic Systems was organized. The idea for holding a NATO ASI on this topic grew out of an informal discussion between one of the co-directors and Professor Francisco Nunes-Correia at a previous NATO ASI held at Tucson, Arizona in 1985. The Special Program Panel on Global Transport Mechanisms in the Geo-Sciences of the NATO Scientific Affairs Division agreed to sponsor the ASI and an organizing committee was formed. The committee comprised the co­ directors, Professor David S. Bowles (U.S.A.) and Professor P. Enda O'Connell (U.K.), and Professor Francisco Nunes-Correia (Portugal), Dr. Donn G. DeCoursey (U.S.A.), and Professor Ezio Todini (Italy).