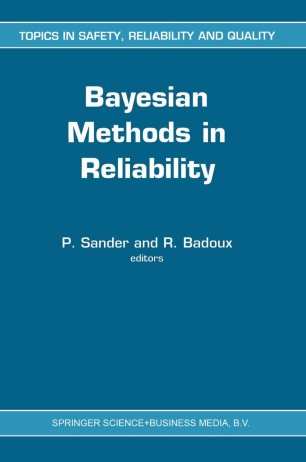 Part of the Topics in Safety, Reliability and Quality book series (TSRX, volume 1)

When data is collected on failure or survival a list of times is obtained. Some of the times are failure times and others are the times at which the subject left the experiment. These times both give information about the performance of the system. The two types will be referred to as failure and censoring times (cf. Smith section 5). * A censoring time, t, gives less information than a failure time, for it is * known only that the item survived past t and not when it failed. The data is tn and of censoring thus collected as a list of failure times t , . . . , l * * * times t , t , . . . , t • 1 z m 2. 2. Classical methods The failure times are assumed to follow a parametric distribution F(t;B) with and reliability R(t;B). There are several methods of estimating density f(t;B) the parameter B based only on the data in the sample without any prior assumptions about B. The availability of powerful computers and software packages has made the method of maximum likelihood the most popular. Descriptions of most methods can be found in the book by Mann, Schafer and Singpurwalla (1974). In general the method of maximum likelihood is the most useful of the classical approaches. The likelihood approach is based on constructing the joint probability distrilmtion or density for a sample.