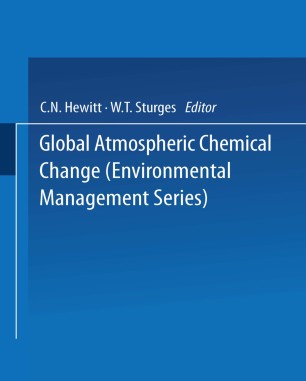 Air pollution has historically been viewed as a local or regional scale problem with attention focused on acute episodes such as the sulphur dioxide and smoke smogs of London in the 1950s and 1960s and the photochemical smogs of southern California first recognized by Haagen­ Smit in the early 1950s. In recent years, however, it has become apparent that human activity has, and still is, changing the chemical composition of the atmosphere on a global scale. The composition of the atmosphere has seen enormous changes due to natural processes since the formation of the planet. Data obtained from air bubbles trapped in polar ice are beginning to reveal information about these changes over the last tens of thousands of years and geochemical models of the evolution of the Earth give us insights into the changes over much longer periods of time. Perhaps the crucial differences between these natural changes and those now being induced by man are their rel­ ative rates of change. The magnitude of present day fluxes of some com­ pounds released as air pollutants is in some cases much larger than those arising naturally. In other cases, for example carbon dioxide, the an­ thropogenic emission rates are small compared with that of the natural cycle, but the kinetics of the system are such that the steady state concent­ rations of the compounds in the atmosphere are now being perturbed.