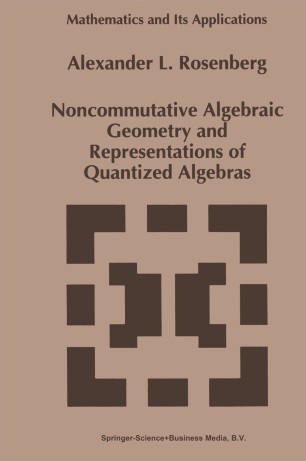 Part of the Mathematics and Its Applications book series (MAIA, volume 330)

This book is based on lectures delivered at Harvard in the Spring of 1991 and at the University of Utah during the academic year 1992-93. Formally, the book assumes only general algebraic knowledge (rings, modules, groups, Lie algebras, functors etc.). It is helpful, however, to know some basics of algebraic geometry and representation theory. Each chapter begins with its own introduction, and most sections even have a short overview. The purpose of what follows is to explain the spirit of the book and how different parts are linked together without entering into details. The point of departure is the notion of the left spectrum of an associative ring, and the first natural steps of general theory of noncommutative affine, quasi-affine, and projective schemes. This material is presented in Chapter I. Further developments originated from the requirements of several important examples I tried to understand, to begin with the first Weyl algebra and the quantum plane. The book reflects these developments as I worked them out in reallife and in my lectures. In Chapter 11, we study the left spectrum and irreducible representations of a whole lot of rings which are of interest for modern mathematical physics. The dasses of rings we consider indude as special cases: quantum plane, algebra of q-differential operators, (quantum) Heisenberg and Weyl algebras, (quantum) enveloping algebra ofthe Lie algebra sl(2) , coordinate algebra of the quantum group SL(2), the twisted SL(2) of Woronowicz, so called dispin algebra and many others.