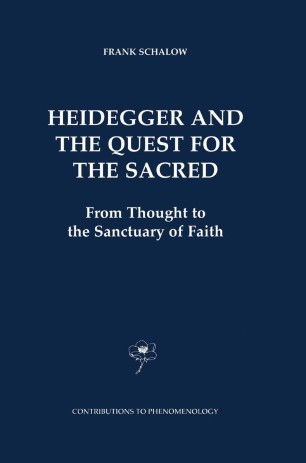 Heidegger and the Quest for the Sacred

From Thought to the Sanctuary of Faith

Part of the Contributions to Phenomenology book series (CTPH, volume 44)

Although there are various `religious' traces in Heidegger's philosophy, little effort has been made to show the systematic import which his thinking has for outlining a full range of religious and theological questions. Precisely because his thought is opposed to the construction of any `dogma', his vast writings provide clues to what meaning(s) the `Sacred' and the `Divine' may have in a postmodern age where the very possibility of `faith' hangs in the balance. By showing how Heidegger's own thinking can be interpreted as a struggle to come to terms with religious questions, this book undertakes a postmodern investigation of the Sacred which both draws upon and transcends various world-religions and denominations. A postmodern, non-sectarian vision of the Sacred thereby becomes possible which is open to the plurality of religious experiences on the one hand, and yet affirms on the other Heidegger's emphasis (in Beiträge zur Philosophie) on the `last god' as the displacing of all sectarian visions of god.
This book will have special appeal to Heidegger scholars, as well as students interested in the overlap between phenomenology and philosophical theology.