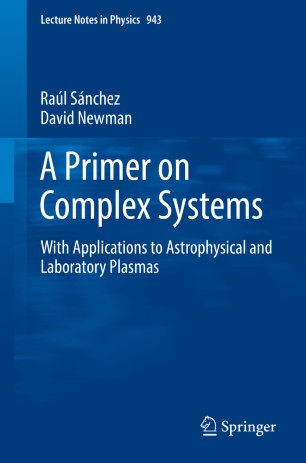 A Primer on Complex Systems

With Applications to Astrophysical and Laboratory Plasmas

The purpose of this book is to illustrate the fundamental concepts of complexity and complex behavior and the best methods to characterize this behavior by means of their applications to some current research topics from within the fields of fusion, earth and solar plasmas. In this sense, it is a departure from the many books already available that discuss general features of complexity.
The book is divided in two parts. In the first part the most important properties and features of complex systems are introduced, discussed and illustrated. The second part discusses several instances of possible complex phenomena in magnetized plasmas and some of the analysis tools that were introduced in the first part are used to characterize the dynamics in these systems. A list of problems is proposed at the end of each chapter.
This book is intended for graduate and post-graduate students with a solid college background in mathematics and classical physics, who intend to work in the field of plasma physics and, in particular, plasma turbulence. It will also be of interest to senior scientists who have so far approached these systems and problems from a different perspective and want a new fresh angle.