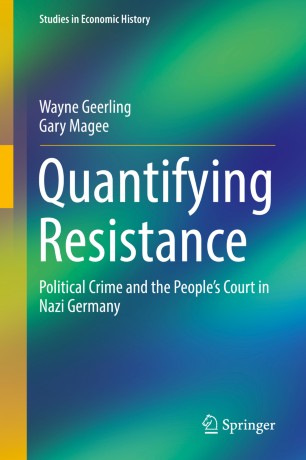 Political Crime and the People’s Court in Nazi Germany

Part of the Studies in Economic History book series (SEH)

This book presents and uses a major, new database of the most serious forms of internal resistance to the Nazi state to study empirically the whole phenomenon of resistance to an authoritarian regime. By studying serious political resistance from a quantitative historical perspective, the book opens up a new avenue of research for economic history.
The database underpinning the book was painstakingly compiled from official state records of treason and/or high treason tried before the German People’s Court (Volksgerichtshof) between 1933 and 1945. It brings together material on resistance groups stored in the archives of the Federal Republic of Germany and Austria with previously inaccessible files from the former German Democratic Republic, Czechoslovakia and Soviet Union. Through searching these records, the authors have been able to reconstruct in hitherto unattainable detail the economic, social, political, ethnic and familial profiles, backgrounds, and influences of all 4,378 civilians of the Third Reich active in Germany, Austria and the outside territories for whom there are complete records.
The findings of their research afford fresh, new interdisciplinary insights and perspectives, not only on the configuration, timing, impact and profile of resistance to the Nazi state, but also on a range of real-world behaviours common within authoritarian states, such as defection, reward and punishment, and commitment to group identities. The book’s statistical analysis reveals precisely the who, how, where and when of serious resistance. In so doing, it advances significantly our understanding of the overall pattern and nature of serious resistance within Nazi Germany.