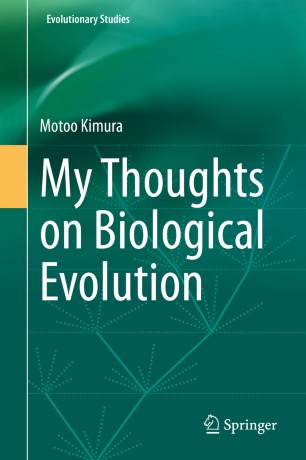 My Thoughts on Biological Evolution

This book, written by Motoo Kimura (1924–94), is a classic in evolutionary biology. In 1968, Kimura proposed the “neutral theory of molecular evolution”, which became the theoretical basis of modern evolutionary studies. After publishing his work in 1983 in the book “Neutral Theory of Molecular Evolution”, Kimura wrote this book in 1988 for the general public. It was originally written in Japanese and is translated here for the first time.

In the book, Kimura first summarizes the development of evolutionary theory since Lamarck and Darwin. He then shows how the search for mechanisms of evolution developed into population genetics and describes how the study of molecular evolution matured by taking in the fruits of molecular biology. Kimura proceeds to carefully explain his neutral evolution theory at the molecular level. Finally, he presents his view of the world from an evolutionary perspective.

The book has long served as an in-depth introduction to evolutionary biology for students and young researchers in Japan. There has been remarkably rapid progress in the field of bioscience at the molecular level over the past 30 years. Nevertheless, the book remains an important contribution that laid the foundations for what followed in molecular evolutionary studies.