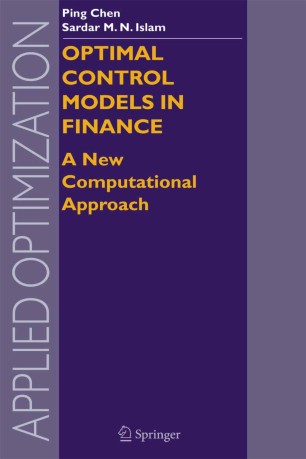 The determination of optimal financing and investment strategies (optimal capital structure or optimal mix of funds, optimal portfolio choice, etc.) for corporations and the economy are important for efficient allocation of resources in the economy. Optimal control methods have useful applications to these areas in finance - some optimization problems in finance include optimal control, involving a dynamic system with switching times in the form of bang-bang control. Optimal control models for corporate finance and the economy are presented in this book and the analytical and computational results of these models are also reported. Such computational approaches to the study of optimal corporate financing are not well known in the existing literature. This book develops a new computational method where switching times are considered as variables in the optimal dynamic financial model represented by a second order differential equation. A new computer program named CSTVA (Computer Program for the Switching Time Variables Algorithm), which can compute bang-bang optimal financial models with switching time, is also developed. Optimal financing implications of the model results in the form of optimal switching times for changes in financing policies and the optimal financial policies are analyzed.