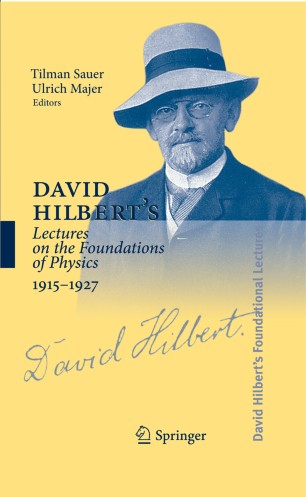 David Hilbert's Lectures on the Foundations of Physics 1915-1927

Volume 5 has three parts, dealing with General Relativity, Epistemological Issues, and Quantum Mechanics. The core of the first part is Hilbert’s two semester lecture course on ‘The Foundations of Physics’ (1916/17). This is framed by Hilbert’s published ‘First and Second Communications’ on the ‘Foundations of Physics’ (1915, 1917) and by a selection of documents dealing with more specific topics like ‘The Principle of Causality’ or a lecture on the new concepts of space and time held in Bucharest in 1918. The epistemological issues concern the intricate relation between nature and mathematical knowledge, in particular the question of irreversibility and objectivity (1921) as well as the subtle question whether what Hilbert calls the ‘world equations’ are physically complete (1923). The last part deals with quantum theory in its early, advanced and mature stages. Hilbert held lecture courses on the mathematical foundations of quantum theory twice, before and after the breakthrough in 1926. These documents bear witness to one of the most dramatic changes in the foundations of science.