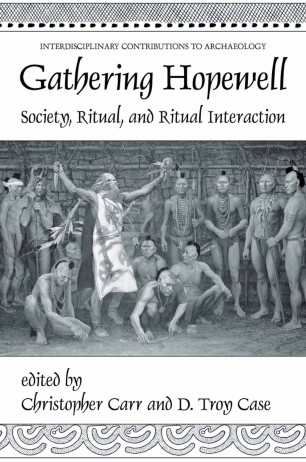 Part of the Interdisciplinary Contributions to Archaeology book series (IDCA)

Among the most socially and personally vocal archaeological remains on the North American continent are the massive and often complexly designed earthen architecture of Hopewellian peoples of two thousand years ago, their elaborately embellished works of art made of glistening metals and stones from faraway places, and their highly formalized mortuaries. In this book, twenty-one researchers in interwoven efforts immerse themselves and the reader in this vibrant archaeological record in order to richly reconstruct the faces, actions, and motivations Hopewellian people in their social and ritual life. Using a personalized and locally contextualized approach, the authors explore Hopewellian leadership, systems of social ranking and prestige, animal-totemic clan organization, kinship structures, sodalities, gender, community organizations, strategies of intercommunity alliance, and interregional travels for power questing, pilgrimage, healing, tutelage, and acquiring rituals.
"Seldom does a small group of scholars and their research have the opportunity to remake an entire field of inquiry. Christopher Carr, Troy Case, and their colleagues and students have done so. Gathering Hopewell provides new and strong foundations for a truly social and cultural archaeology and offers solid direction for future work on the spectacular remains of prehistoric "Hopewell" groups of Eastern North America. This work offers an unmatched conjunction of social and cultural theory, great scholarly imagination, and unprecedented empirical evidence." – Christopher Peebles, Professor of Anthropology, Indiana University
"Gathering Hopewell is, by any measure, an outstanding contribution to knowledge about one of the most important, but least understood, cultural developments in eastern North America. This authoritative, comprehensive, and provocative book will no doubt prove to be a much-welcomed watershed in Hopewell-related research." – George Milner, Professor of Anthropology, Pennsylvania State University
"Gathering Hopewell is remarkable in its humanizing of Hopewellian archaeological records and synthesis of Hopewellian life. Its represents a major advance in archaeological mortuary theory and analysis and their potential for understanding past societies." – Robert Mainfort, Professor of Anthropology, Arkansas Archaeological Survey