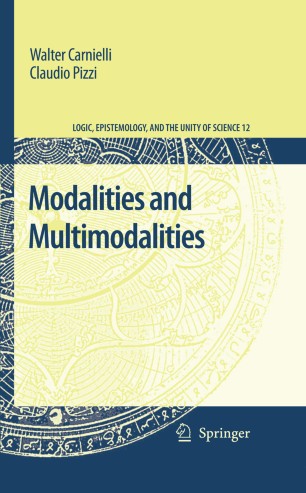 With the assistance and collaboration of Juliana Bueno-Soler

Part of the Logic, Epistemology, and the Unity of Science book series (LEUS, volume 12)

In the last two decades modal logic has undergone an explosive growth, to thepointthatacompletebibliographyofthisbranchoflogic,supposingthat someone were capable to compile it, would ?ll itself a ponderous volume. What is impressive in the growth of modal logic has not been so much the quick accumulation of results but the richness of its thematic dev- opments. In the 1960s, when Kripke semantics gave new credibility to the logic of modalities? which was already known and appreciated in the Ancient and Medieval times? no one could have foreseen that in a short time modal logic would become a lively source of ideas and methods for analytical philosophers,historians of philosophy,linguists, epistemologists and computer scientists. The aim which oriented the composition of this book was not to write a new manual of modal logic (there are a lot of excellent textbooks on the market, and the expert reader will realize how much we bene?ted from manyofthem)buttoo?ertoeveryreader,evenwithnospeci?cbackground in logic, a conceptually linear path in the labyrinth of the current panorama of modal logic. The notion which in our opinion looked suitable to work as a compass in this enterprise was the notion of multimodality, or, more speci?cally, the basic idea of grounding systems on languages admitting more than one primitive modal operator.