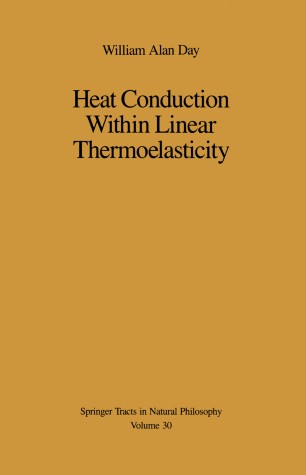 J-B. J. FOURIER'S immensely influential treatise Theorie Analytique de la Chaleur [21J, and the subsequent developments and refinements of FOURIER's ideas and methods at the hands of many authors, provide a highly successful theory of heat conduction. According to that theory, the growth or decay of the temperature e in a conducting body is governed by the heat equation, that is, by the parabolic partial differential equation Such has been the influence of FOURIER'S theory, which must forever remain the classical theory in that it sets the standard against which all other theories are to be measured, that the mathematical investigation of heat conduction has come to be regarded as being almost identicalt with the study of the heat equation, and the reader will not need to be reminded that intensive analytical study has t But not entirely; witness, for example, those theories which would replace the heat equation by an equation which implies a finite speed of propagation for the temperature. The reader is referred to the article [9] of COLEMAN, FABRIZIO, and OWEN for the derivation of such an equation from modern Continuum Thermody­ namics and for references to earlier work in this direction. viii Introduction amply demonstrated that the heat equation enjoys many properties of great interest and elegance.