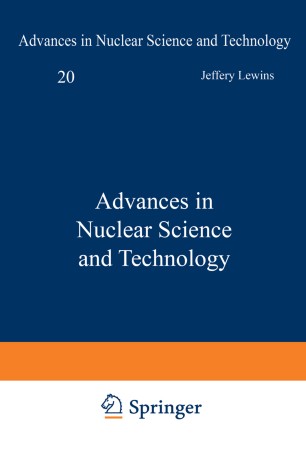 Advances in Nuclear Science and Technology

Part of the Advances in Nuclear Science and Technology book series (ANST, volume 20)

The editors are happy to present the twentieth volume in the review series Advances in Nuclear Science and Technology. Lahey and Drew, our first authors, present a concise development of the equations for two-phase flow, essential to the understanding of normal and, even more, accidental behavior in water-cooled reactors. The commitment to the PWR in Europe (now joined by England in this respect) and the aftermath of Chernobyl in the U.S.S.R. put continuing emphasis on the need for good understanding of two-phase phenomena to provide good modelling. The second review, by Downar and Sesonske, of light water reactor fuel modelling, follows this LWR interest and emphasises a current major economic interest: how to get the most out of fuel. Recollecting that the capital cost of nuclear power is high, it is easy to overlook the fact that in the lifetime of a plant as much money is spent on fuel as capital. Optimization is worthwhile. The U.S. scene still does not practice recycling whereas the European scene does. Now that the United Kingdom is building its first (commercial) light water reactor, the linear modelling of burnup exploited by the second authors will prove even more useful, although previously exploited for advanced gas-cooled reactors. If the U.K. is behind in this respect, the recycling undertaken by France and England has led to trial use of plutonium in thermal reactors but, even more, the availability of plutonium for fast reactors.