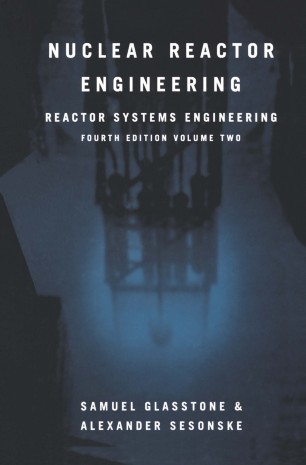 Dr. Samuel Glasstone, the senior author of the previous editions of this book, was anxious to live until his ninetieth birthday, but passed away in 1986, a few months short of this milestone. I am grateful for the many years of stimulation received during our association, and in preparing this edition have attempted to maintain his approach. Previous editions of this book were intended to serve as a text for students and a reference for practicing engineers. Emphasis was given to the broad perspective, particularly for topics important to reactor design and oper­ ation, with basic coverage provided in such supporting areas as neutronics, thermal-hydraulics, and materials. This, the Fourth Edition, was prepared with these same general objectives in mind. However, during the past three decades, the nuclear industry and university educational programs have matured considerably, presenting some challenges in meeting the objec­ tives of this book. Nuclear power reactors have become much more complex, with an ac­ companying growth in supporting technology. University programs now offer separate courses covering such basic topics as reactor physics, thermal­ hydraulics, and materials. Finally, the general availability of inexpensive xv xvi Preface powerful micro-and minicomputers has transformed design and analysis procedures so that sophisticated methods are now commonly used instead of earlier, more approximate approaches.