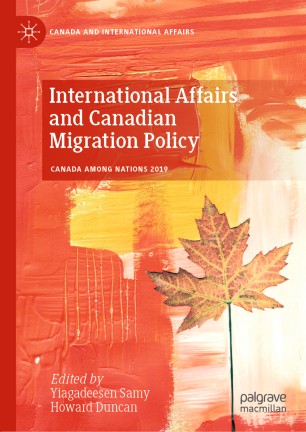 Part of the Canada and International Affairs book series (CIAF)

Yiagadeesen Samy is Director and Full Professor at the Norman Paterson School of International Affairs, Carleton University, Ottawa, Canada.
Howard Duncan is Adjunct Research Professor, Department of Political Science, Carleton University; is Former Chair, Metropolis International Steering Committee; and is Former Editor, International Migration.
This volume examines Canada’s migration policy as part of its foreign policy.  It is well known that Canada is a nation of immigrants.  However, immigration policy has largely been regarded as domestic, rather than, foreign policy, with most scholarly and policy work focused on what happens after immigrants have arrived in this country. As a result, the effects of immigration to Canada on foreign affairs have been largely neglected despite the international character of immigration. The contributors to this volume underline the extent to which Canada’s relationships with individual countries and with the international community is closely affected by its immigration policies and practices and draw attention to some of these areas in the hope that it will encourage more scholarly and policy activity directed to the impact of immigration on foreign affairs.  Written by both academics and policy-makers, the book analyzes some of the latest thinking and initiatives related to linkages between migration and foreign policy.