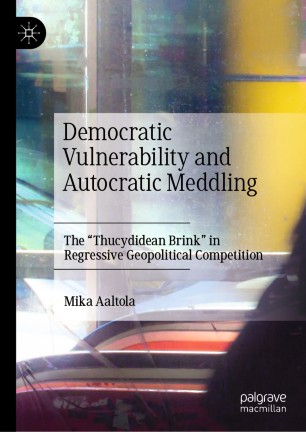 This book investigates complex regressive dynamics in contemporary Western democracies. They include not only severe polarization in domestic politics, but also efforts by external autocratic powers to co-opt the increasingly digitalized political processes in the West. The discussion on democratic vulnerability and regression has rarely been historically and theoretically reflective. The aim is to fill this relative void by drawing on classical sources to inform about the political anxieties and agitations of our present time as the Western world moves towards new critical elections. The key concept of the analysis, a Thucydidean brink, refers to a critical point where the attraction felt towards an outside geopolitical competitor becomes stronger than the political affinity felt towards one’s domestic political opponent. As political polarization, societal decomposition and the collusive tendencies grow in strength, political factions and political candidates in western societies can be(come) drawn to autocratic actors. Perhaps most alarmingly, the resulting nexus between democracies and autocracies can further intensify mutual regression and form downwards-sloping spirals that are not ultimately under any strategic control. This book draws from the experiences of recent elections in major Western democracies to illustrate the widening and deepening underlying regressive tendency.