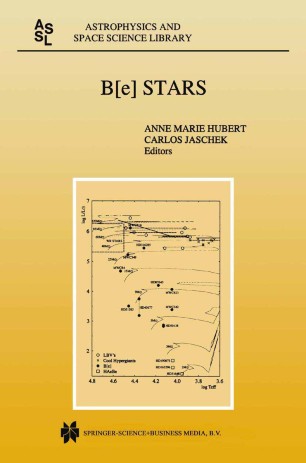 The idea of having a meeting came to the Editors when working on several aspects of galactic Be and B[e] stars. They found that a general summary of the properties of B[e] stars was missing, so that the organiza­ tion of a first meeting on these objects appeared as very useful. B[e] stars have hydrogen line emission and forbidden [Fe 11] and [0 I] emission lines in their spectra; they are also characterized by a strong IR excess due to circumstellar dust. Having a large amount of extinction in the UV and the visual they have been less frequently observed than other emission line objects. Although about one hundred galactic objects have been classified as B[e], only fif­ teen or so have been studied in some detail. Besides this, the evolutionary status of these objects is rat her controversial, are they pre-main sequence or stars on the way to become nUclei of planetary nebulae? Other difficult problems appear when considering the relations of these stars with other similar groups, like Herbig AeBe stars, Be, luminous blue variables and the superluminous B[e] stars observed in the Magellanic Clouds. The conference seems timely since large surveys like DENIS and 2Mass, plus new space and new instruments for the micron, millimeter and cen­ timeter wavelength region will result in the discovery of more stars of this group.