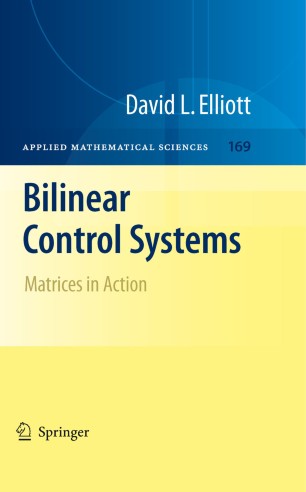 A control system is called bilinear if it is described by linear differential equations in which the control inputs appear as coefficients. The study of bilinear control systems began in the 1960s and has since developed into a fascinating field, vital for the solution of many challenging practical control problems. Its methods and applications cross inter-disciplinary boundaries, proving useful in areas as diverse as spin control in quantum physics and the study of Lie semigroups.

The first half of the book is based upon matrix analysis, introducing Lie algebras and the Campbell-Baker-Hausdorff Theorem. Individual chapters are dedicated to topics such as discrete-time systems, observability and realization, examples from science and engineering, linearization of nonlinear systems, and input-output analysis.

Written by one of the leading researchers in the field in a clear and comprehensible manner and laden with proofs, exercises and Mathematica scripts, this involving text will be a vital and thorough introduction to the subject for first-year graduate students of control theory. It will also be of great value to academics and researchers with an interest in matrix analysis, Lie algebra, and semigroups.