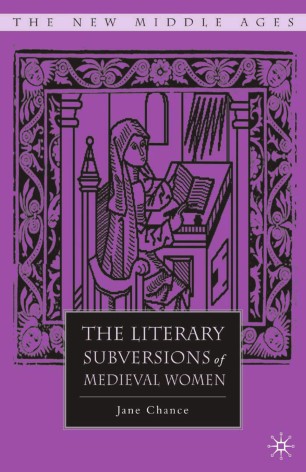 The Literary Subversions of Medieval Women

This study of medieval women as postcolonial writers defines the literary strategies of subversion by which they authorized their alterity within the dominant tradition. To dismantle a colonizing culture, they made public the private feminine space allocated by gender difference: they constructed 'unhomely' spaces. They inverted gender roles of characters to valorize the female; they created alternate idealized feminist societies and cultures, or utopias, through fantasy; and they legitimized female triviality the homely female space to provide autonomy. While these methodologies often overlapped in practice, they illustrate how cultures impinge on languages to create what Deleuze and Guattari have identified as a minor literature, specifically for women as dis-placed. Women writers discussed include Hrotsvit of Gandersheim, Hildegard of Bingen, Marie de France, Marguerite Porete, Catherine of Siena, Margery Kempe, Julian of Norwich, and Christine de Pizan.