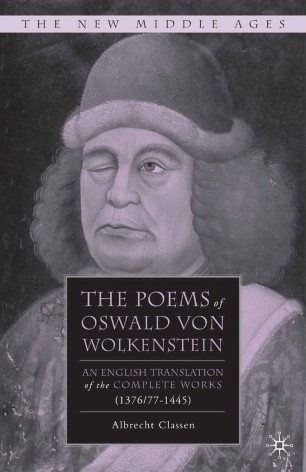 The Poems of Oswald Von Wolkenstein

This book offers the first complete English translation of the poems by the late-medieval German (Tyrolean) Oswald von Wolkenstein (1376/1377-1445). Oswald von Wolkenstein was one of the leading poets of his time and created some of the most exciting, experimental, and also deeply religious-conservative poetry of the entire Middle Ages and far beyond. German scholarship and musicologists have long recognized the extraordinary strength and power of Oswald s Middle High German songs, both in terms of his poetic imagery and his musical performance. This book proves Oswald's uvre to be one of the most idiosyncratic and individualistic in the entire late Middle Ages. Classen reveals how Oswald continued the medieval tradition, yet was a true innovator, exploring new attitudes toward love, sexuality, travel, war, politics, language, music, and, above all, his own individuality.