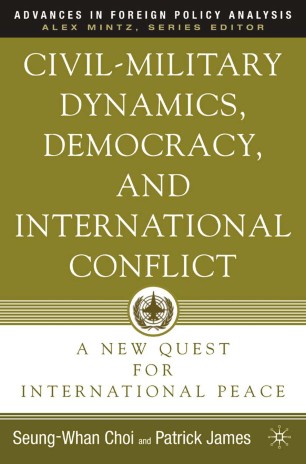 A New Quest for International Peace

Addressing decision-making over interstate disputes and the democratic peace thesis, Choi and James build an interactive foreign policy decision-making model with a special emphasis on civil-military relations, conscription, diplomatic channels and media openness. Each is significant in explaining decisions over dispute involvement. The temporal scope is broad while the geographic scope is global. The result is sophisticated analysis of the causes of conflict and factors that can ameliorate it, and a generalizable approach to the study of foreign relations. The findings that media openness contributes to peaceful resolution of disputes, that the greater the influence of the military the more likely for their to be interstate disputes, that conscription is likely to have the same effect, and that increases in diplomatic interaction correlate with increased conflict are sure to generate debate.