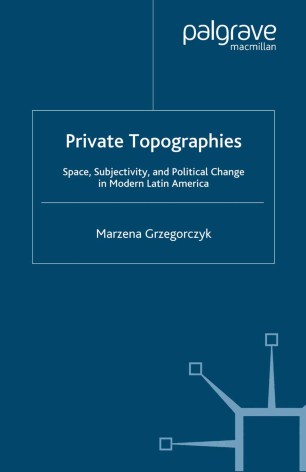 In Private Topographies, Grzegorczyk identifies and analyzes the types of postcolonial subjectivity prevalent among the Creole (Euro-American) ruling classes in post-independence, nineteenth-century century Latin America as articulated through their relation to their surroundings. Exactly how did creole elites change their self-conception in the wake of independence? In what ways and why did they feel compelled to restructure their personal space? What contradictions did they respond to? Where and how were the boundaries between public and private constructed? How were the categories of race and gender relevant to this process? For the first time, this book links together political transitions (the end of the colonial period in Latin America) with "implacements" - attempts that people make to reorganize the space around them. By looking at cartographies of states and regions, the structure of towns, and appearance and lay-out of homes in literature from Mexico, Argentina and Brazil from this nineteenth century period of transition, Grzegorczyk sheds new light on the ways a culture remakes itself and the mechanisms through which subjectivities shift during periods of political change.