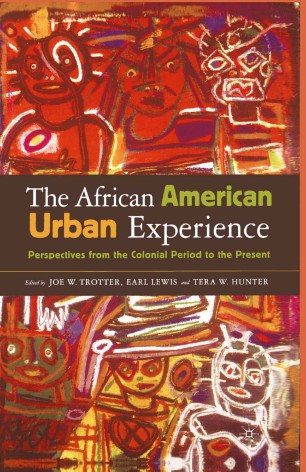 African American Urban Experience: Perspectives from the Colonial Period to the Present

From the early years of the African slave trade to America, blacks have lived and laboured in urban environments. Yet the transformation of rural blacks into a predominantly urban people is a relatively recent phenomenon - only during World War One did African Americans move into cities in large numbers, and only during World War Two did more blacks reside in cities than in the countryside. By the early 1970s, blacks had not only made the transition from rural to urban settings, but were almost evenly distributed between the cities of the North and the West on the one hand and the South on the other. In their quest for full citizenship rights, economic democracy, and release from an oppressive rural past, black southerners turned to urban migration and employment in the nation's industrial sector as a new 'Promised Land' or 'Flight from Egypt'. In order to illuminate these transformations in African American urban life, this book brings together urban history; contemporary social, cultural, and policy research; and comparative perspectives on race, ethnicity, and nationality within and across national boundaries.