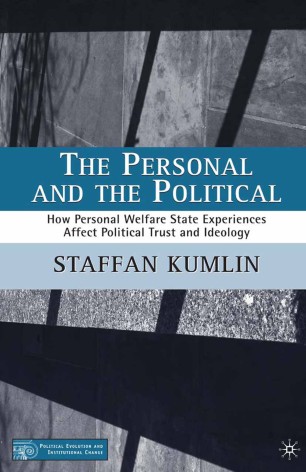 The Personal and the Political: How Personal Welfare State Experiences Affect Political Trust and Ideology

This study investigates the extent to which personal welfare state experiences affect general political orientations and attitudes. What are the political effects when a person is discontent with some aspect of, say, the particular health services or the public kindergartens that she has been in personal contact with? Do they lose faith in the welfare state or in leftist ideas about large-scale state intervention in society? Do they take their negative experiences as a sign that the political system and its politicians are not functioning satisfactorily? Will their inclination to support the governing party drop? And if so, how strong are the political effects of personal welfare state experiences compared to those of other, more well-known, explanatory factors? Addressing these and other questions, this study develops a theoretical framework that incorporates insights from a multitude of research traditions, including research on the welfare state, voting behaviour, social psychology, rational choice theory, political psychology, and institutional theory. The framework is tested empirically using Swedish primary survey data collected under the auspices of the 1999 West Sweden SOM Survey, and the 1999 Swedish European Parliament Election Study.