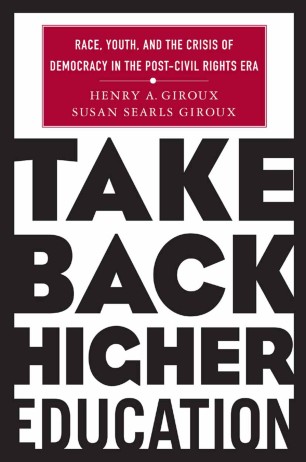 Race, Youth, and the Crisis of Democracy in the Post-Civil Rights Era

At the beginning for the new millennium, higher education is under siege. No longer viewed as a public good, higher education increasingly is besieged by corporate, right-wing and conservative ideologies that want to decouple higher education from its legacy of educating students to be critical and autonomous citizens, imbued with democratic and public values. The greatest danger faced by higher education comes from the focus of global neo-liberalism and the return of educational apartheid. Through the power of racial backlash, the war on youth, deregulation, commercialism, and privatization, neo-liberalism wages a vicious assault on all of those public spheres and goods not controlled by the logic of market relations and profit margins. Take Back Higher Education argues that if higher education is going to meet the challenges of a democratic future, it will have to confront neo-liberalism, racism, and the shredding of the social contract.