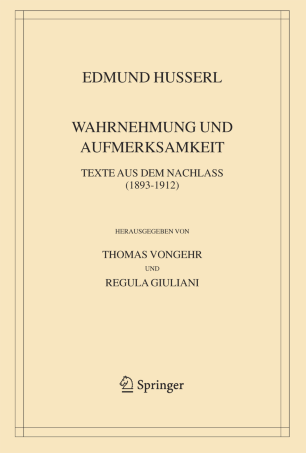 Edmund Husserl (1859 - 1938) is one of the most influential philosophers of this century. Among those influenced by his transcendental phenomenology are thinkers as diverse as Max Scheler, Martin Heidegger, Hans-Georg Gadamer, Jean-Paul Sartre, Maurice Merleau-Ponty, Aron Gurwitsch, Alfred Schutz and Helmuth Plessner. Springer Science + Business Media B.V. is therefore proud to publish not only Husserl's Complete Works, the Husserliana: being critical and annotated re-editions of works that appeared during Husserl's life, together with additions and relevant texts from his Nachlaß, lecture notes with subsequent additions, and the so-called 'monologische Forschungsmanuskripte', which Husserl did not mean to publish, but which contain essential material for a clear and complete understanding of his thought. There are also translations into English of his major books, the Collected Works, and material essential to a clear understanding of his thought that takes into account its evolution and enormous scope, the Dokumente.The Materialien series will publish reliable transcriptions of unpublished mauscripts. There is a journal devoted to the elucidation of Husserl's thought and to phenomenology in general: Husserl Studies.

Edited under the auspices of the Husserl-Archives, Louvain, Belgium.

Translators of Husserl’s texts (including parts thereof) must submit (samples of) their translation for review by the Husserl Archives in Leuven prior to publication.

Please note that translation rights in English are not available for the Husserliana Gesammelte Werke, Husserliana Dokumente or Husserliana Materialien.

Further information on Springer Rights and Permissions can be found here and the email address to request permission is bookpermissions@springernature.com.