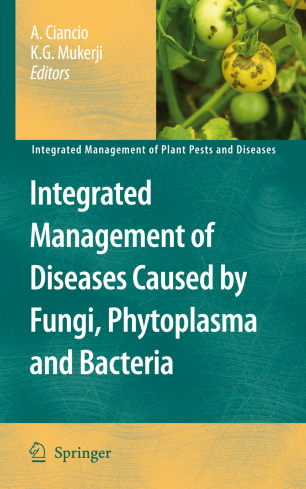 In view of environmental and health concerns, a determined effort was made in the last years to reduce and rationalize the use of chemicals (pesticides, fungicides, nematocides etc.) worldwide, in order to manage pests/pathogens more effectively. This approach led to the emergence of a new discipline called IPM/IDM (integrated pest management/integrated disease management). In the classical version of the IPM/IDM, a pesticide/fungicide is applied only when the pathogen population reaches a level inducing economic crop losses. In other words, classical IPM/IDM concentrates on reducing the numbers of the noxious agents with agrochemicals. However, in the present IPM/IDM means "A disease management system that, in the context of the associated environment and the population dynamics of the pest/pathogen species, utilises all suitable techniques and methods in a manner as compatible as possible and maintains the pest/pathogen population at levels below those causing economic injury". IPM/IDM in the broad sense has been defined as "the optimization of pest/pathogen control in an economically and ecologically sound manner, accomplished by the coordinated use of multiple tactics to assure stable crop production and to maintain pathogen pest damage below the economic injury level while minimizing hazards to humans, animals, plants and the environment". Health of plants depends on their interaction with pathogens/pests and a further complex cohort of other organisms, as well as with the physical and chemical environment in which the plant is growing. Thus IPM/IDM moves beyond a one-plant one-pathogen/one-pest control view toward an integrated view of plant health as a result of complex interactions between the plant, other organisms and the physical and chemical environment. Moreover, the basic concern of IPM/IDM is with designing and implementing pest/disease management practices that meet the goals of farmers, consumers and government in reducing pest/disease losses while at the same time safeguarding against the longer term risks of environmental pollution, hazard to human health and reduced agricultural sustainability.

This is the approach the Editors looked for within this series. The volumes deal with diseases caused by main crops enemies like nematodes, insects, fungi, bacteria and phytoplasmas. A wide array of important parasites and diseases of crop and forest plants, vegetables, fruits and ornamentals is considered. Various aspects related to integrated management are discussed by internationally known authorities taking in account their incidence, occurrence, establishment, virulence and crop losses, effects on crop yield, life-cycle inside and outside the host, ecology etc. Based on this view, the emphasis is made on biological control and integrated disease/pest management. Chapters are also devoted to interactions with other microbes/pathogens and pests, historical and local data on traditional