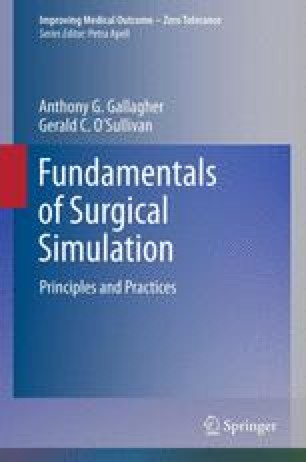 Computer-based simulation has several advantages when compared with conventional methods for surgical training. One major advantage is that the same experience or sequence of events can be replicated repeatedly. This repetition allows the trainee to learn from mistakes in a safe environment. Another benefit which is probably of equal if not more omportance is the objective feedback a trainee can receive. Since everything a trainee “does” on a computer-based simulator is essentially data, all actions can be tracked.

Laparoscopic Cholecystectomy Virtual Reality Operational Definition Trained Group Surgical Performance
These keywords were added by machine and not by the authors. This process is experimental and the keywords may be updated as the learning algorithm improves.
This is a preview of subscription content, log in to check access.

Exposure Starts: Once fundus is stable

Lack of Progress – Absolutely no progress is made for an entire minute. Each minute spent dealing with the consequences of a predefined error represents lack of progress and should be evaluated as such.

Non-target structure injury – There is a perforation or tear of a non-target structure (i.e. liver, bowel, common duct) with or without associated bleeding or bile leakage. Injury in this instance does not include electrocautery along the surface, as this would be classified as burning non-target tissue.

Gallbladder injury – There is gallbladder wall perforation with or without leakage of bile.

Cystic duct injury – There is a perforation or tear of the cystic duct indicated by leakage of bile.

Cystic artery injury – There is a perforation or tear of the cystic artery indicated by hemorrhage. Scoring continues until the hemorrhage is arrested. If a clip is applied, it is applied safely and appropriately, otherwise it is considered an error for the interval it was placed.

Incorrect angle of gallbladder retraction – Retraction of gallbladder is provided such that dissection proceeds within an inadequately distracted, or “closed” Triangle of Calot prior to fenestration of triangle window.

Dropped retraction – Retracted tissue is suddenly dropped. Errors are counted only if re-grasping and retraction along a similar angle are subsequently required.

Clipping Start: The appearance of the clip

Clipping End: Once clip is placed

General Errors (applies to both clipping and transection)

Poor clip orientation – Clip placed >10° from perpendicular as oriented to cystic duct or cystic artery after clip applier is removed.

Poor Application – Clip is applied such that it is (1) incompletely closed, (2) scissored or (3) requires re-grasp manipulation.

Clip drop – Clip comes out of clip applier prior to application. Application occurs once any part of the structure being clipped is within the jaws of the clip applier.

Lack of Progress – No progress is made for an entire minute of the dissection. Each minute spent dealing with the consequences of a predefined error represents lack of progress and should be evaluated as such.

Burn Nontarget tissue – Any application of electrocautery to nontarget tissue with the exception of the final part of the fundic dissection where some current transmission may occur.

Gallbladder injury – There is gallbladder wall perforation with or without leakage of bile.

Liver injury – There is liver capsule and parenchyma penetration, or capsule stripping with or without associated bleeding.

Tearing tissue – Uncontrolled tearing of tissue with the dissecting or retracting instrument.