Adenosine, Cardioprotection and Its Clinical Application 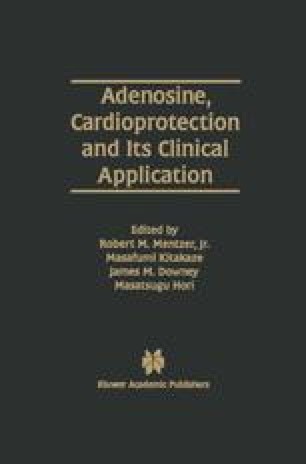 Adenosine, Cardioprotection and Its Clinical Application pp 29-35 | Cite as

The Late Phase of Preconditioning Against Myocardial Stunning

It has recently become apparent that there are two phases of ischemic preconditioning against myocardial stunning: an early phase, which begins within minutes, and a late phase, which begins after >6 h.1 These two phases have different pathophysiology and probably different mechanisms. Although the early phase is somewhat controversial, most of the discrepancies can be explained by differences in the duration of the ischemic insult, as detailed in ref. 1; that is, the available evidence indicates that an episode of ischemia protects against the stunning induced by a second ischemic episode when the second episode lasts ≤, 5 min but not when it lasts ≥ 10 min. When early preconditioning does take place, the protection is limited to only a few ischemic episodes (probably less than five).1 In addition to this early phase of protection, brief ischemia induces a late phase of preconditioning against stunning. This late phase lasts much longer and therefore is likely to be more important from a clinical standpoint.1 The purpose of this essay is to succinctly review the existing knowledge regarding the pathophysiology and pathogenesis of late preconditioning against myocardial stunning.

Late Phase Ischemic Precondition Myocardial Stunning Ischemic Episode Conscious Rabbit
These keywords were added by machine and not by the authors. This process is experimental and the keywords may be updated as the learning algorithm improves.
This is a preview of subscription content, log in to check access.