Loss and the Literary Culture of Shakespeare’s Time 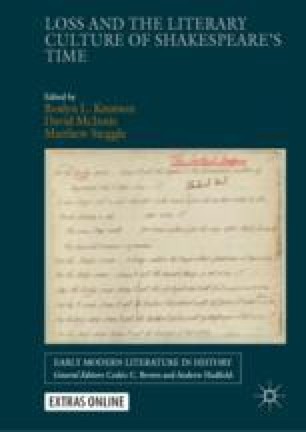 “Histories out of the scriptures”: Biblical Drama in the Repertory of the Admiral’s Men, 1594–1603

Philip Henslowe’s diary is seldom cited in scholarship on the Bible and early English drama, and yet for the acting company that Henslowe documented, the Lord Admiral’s Men, the diary records nine plays based on biblical subjects between 1591 and 1603, six of them for one year, 1602. All of these plays are lost, but we can learn about their structure, themes, and performance aspects from two extant plays written for the commercial theatre of this period, David and Bethsabe and A Looking Glass for London and England, as well as from recent research on lost plays. In this chapter I explore how these plays fit into the commercial repertory of a major London acting troupe, and why the company of Edward Alleyn (Lord Admiral’s) staged so many biblical plays in that one year of 1602. As a context for studying this drama, I reconsider some misdirected critical commonplaces about biblical drama in late Elizabethan England: that it was virtually extinct due to Protestant antitheatricality, that what did survive avoided the representation of divinity—and specifically Christ—on stage, and that the commercial Elizabethan theatre was a fully secular institution that expunged serious treatment of religious issues.

Cite this chapter as:
White P.W. (2020) “Histories out of the scriptures”: Biblical Drama in the Repertory of the Admiral’s Men, 1594–1603. In: Knutson R., McInnis D., Steggle M. (eds) Loss and the Literary Culture of Shakespeare’s Time. Early Modern Literature in History. Palgrave Macmillan, Cham