Video Atlas of Intraoperative Applications of Near Infrared Fluorescence Imaging 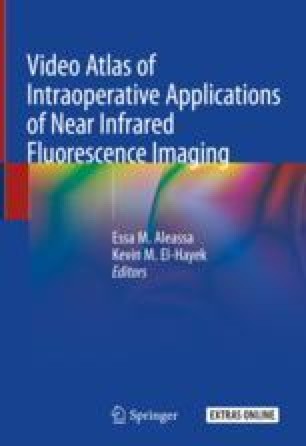 Positive staining technique for the identification of hepatic segment 7. To visualize boundaries of hepatic segment 7, the corresponding portal branch is punctured with a 21G needle under ultrasound guidance and indigo carmine solution (5 mL) with ICG (0.25 mg), and ultrasound contrast material is injected into the portal vein. During the dye-injection, contrast-enhanced ultrasonography demonstrates hyperechoic signals in the lateral region of segment 7 (S7 lat.) and slightly increased echoic signals in the medial region of this segment (S7 med.). Then, fluorescence imaging from the hepatic surfaces visualized clearer demarcation between S7 and surrounding hepatic segments. Gray-scale imaging is superior to other imaging modes in identifying minute differences of fluorescence intensities between S7 lat. and S7. med. Because the tumor is located in the medial aspect of S7, the hepatic transection lines are extended to non-fluorescing regions to remove the hepatic parenchyma of S7 med. and part of segment 8 (S8). The hepatic parenchyma is transected using the clamp-crushing method, with the occasional use of fluorescence imaging to confirm the intersegmental planes between the fluorescing region of S7 and the non-fluorescing region of S8. The portal pedicle of S7 med. is ligated and divided, preserving the portal pedicle supplying S7 lat. Even after completion of hepatectomy procedures, fluorescence imaging clearly shows the boundaries of S7 lat. and the surrounding hepatic regions on the hepatic raw surfaces (MP4 350898 kb)

Negative staining technique for the identification of hepatic segment 6. The tumor (hepatocellular carcinoma [HCC]), located in the subcapsular region of segment 6 (S6), is identified by fluorescence imaging because of accumulation of the indocyanine green that was injected intravenously prior to surgery. Hepatic parenchyma is transected to identify the main portal pedicle of segment 6, which is closed with a vascular clamp at its root. However, fluorescence imaging and visual inspection on white-light color imaging suggests that the tumor is located on the intersegmental boundary between the ischemic region (S6) and the nonischemic hepatic parenchyma (S5). Thus, hepatic parenchymal transection is added to identify and close the portal branch of the lateral region of S5. Then, indocyanine green (2.5 mg) is injected intravenously, enabling clear visualization of the boundaries around the ischemic regions of S5 and S6, which include the tumor, by fluorescence imaging. The hepatic parenchyma is further transected, with occasional use of fluorescence imaging to confirm accurate intersegmental planes. Finally, anatomic segmentectomy of segment 6 extended to segment 5 is completed. The residual hepatic parenchyma of S7 still shows ICG fluorescence signals even after completion of hepatectomy procedures. On the cut surface of the resected specimen, the tumor (well-differentiated HCC) shows cancerous fluorescence signals because of accumulation of the ICG that was administered before surgery (WMV 289626 kb)