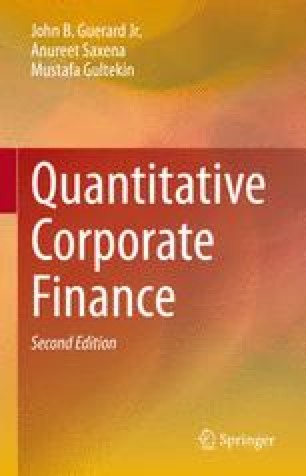 Not every company justifies the confidence of its original investors placed in it. A free enterprise system is one of profit and loss. There is no guarantee that all capital will earn the “normal” rate of return. In a world of change, where sure knowledge of the future is lacking and decisions are made under conditions of more or less uncertainty, the operation of any business is a calculated risk. The data in Fig. 1 depicts the failure rate per 10,000 firms in the United States during the 1930–1998 period. The reader obviously notes the high level of business failures during the Great Depression. The reader may be surprised by the high level of failures during the 1980s, given the excellent stock market performance. Failures have risen substantially during the past 40 years and were very high during the 1990–1992 period. As noted in chapter “Financing Current Operations and Efficiency Ratio Analysis,” there was a deterioration in the Altman Z score, the bankruptcy prediction model, during the 1963–2003 period as a result of falling profit margins and sales efficiency. The large debt issuance of the 1975–2003 period, combined with high-interest rates during several years of the period, was no doubt an important factor in the rising failure rate. Buell and Schwartz (1981) modeled the failure rate in the United States during the 1950–1978 period as a function of the total debt to total assets ratio and the variation about the time trend of the level of employment. Buell and Schwartz reported the increases in the debt ratio were (highly) statistically associated with the failure rate, whereas the failure rate is negatively associated with employment. An economic downturn is associated with decreasing cash flows and lower operating cash flows of firms. Under an increase in financial leverage, a favorable turn in economic events can bring a firm high earnings; however, on the other hand, a recession in demand or a miscalculation of costs may entail substantial losses.