Samuel Pufendorf and the Emergence of Economics as a Social Science 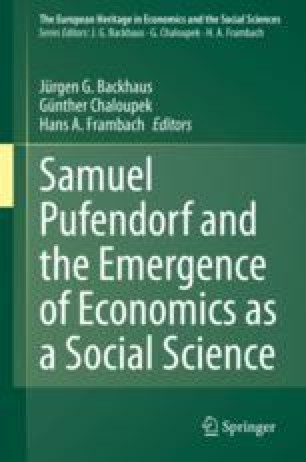 Chapter
Part of the The European Heritage in Economics and the Social Sciences book series (EHES, volume 23)

Samuel von Pufendorf’s theory of the origin of property rights is a strictly positive theory, not at all normative. It has three central propositions: (1) Ownership requires implicit or explicit agreement. (2) Ownership institutions will be whatever people decide they will be. (3) People are motivated to establish ownership institutions by considerations of efficiency. John Locke’s theory of property seems intended as a commentary on Pufendorf’s theory, though Locke does not mention Pufendorf by name. The key difference between Locke and Pufendorf arises because Locke treats Pufendorf’s first proposition as if it was intended to be normative, so that Pufendorf would have been claiming rightful ownership requires agreement. Locke then argues that agreement is not needed for rightful ownership when natural opportunities are abundant and, implicitly, people are not in community with one another. Locke’s normative argument is valid under these conditions, but not otherwise.